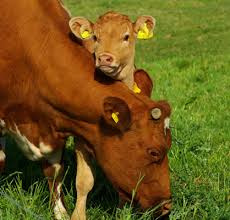 This question is one of the more annoying I think as it implies a great concern for the animals that they have somehow concluded it’s better to continue raising for slaughter than to stop eating them and risk not having them all around us adorning our green fields.  It goes to the very heart of everything that is wrong with out attitudes towards eating animals.  We have these wonderfully old-fashioned images in our heads of happy cows and chirpy chickens spending their days lolling around in deep green meadows and we think that represents everything that is British and wonderful. ‘Jerusalem’ starts playing in our heads at full tempo – but trust me, go and have a look where your last steak, bacon rasher or chicken breast came from – and the dark satanic mills will more likely spring to mind than England’s pleasant pastures seen!

Thus is the power of advertising!  And it’s just such a naïve and ignorant view that it’s really frustrating how out of touch we are.  Over 99% of meat in the States is factory farmed and the UK is heading the same way!

If any of us saw what was going on behind factory farm fences and slaughterhouse walls I’m not sure we’d hold such a nostalgic scene so close to our hearts!

In answer to the question above – here is a brief outline of what would happen.

As we reduce the number of animals we are eating, fewer pigs, turkeys, cows, sheep, fish and other animals will be inseminated for breeding so fewer animals will be raised for slaughter, which means less killing and suffering.  Less animals means less demand for GMO corn, soy, alfalfa and other feed grains, and thus less deforestation, monocropping, and pollution. As this continues, there will be more food to go around, and also monocropped land can be returned to being critically-needed habitat for wildlife, whose populations are being decimated by the habitat loss caused by grazing livestock and growing feed grains.

As the vegan trend continues, streams will come back and run cleaner. Birds, fish, and other animals will start to thrive as there will be less toxic pesticides and fertilizers needed, and the oceans, which we are devastating, will slowly begin to heal and replenish. As studies continually demonstrate, livestock production is the main driving force behind global warming, and so this also will decrease. In addition, by eating less animal-based foods, people will be healthier physically as they eliminate the toxic fat, cholesterol, and animal protein that drive obesity, diabetes, arthritis, cancer, kidney disease, heart disease, and drug dependency. People will become healthier emotionally and spiritually as they feel better about their food choices.  Less people will be forced to work in slaughterhouses which can only be a good thing for them!

The devastating mass extinction of species that is going on right now will slow down. To raise and slaughter hundreds of millions animals daily for food on this planet, we are forcing hundreds of species of animals and plants into extinction every week. Because of our appetites for a few species of birds, mammals, and fish, we are destroying the Earth’s genetic diversity, and it seems absurd to be unconcerned about these tens of thousands of species, but to care only about the few that we’re eating. In any event, the animals we raise for slaughter today for food lived freely in nature for millions of years and could do so again. The animals that we most intensely farm for food and products, such as turkeys, ducks, geese, chickens, and fish, are all doing just fine in the wild (aside from being hunted and having their habitat destroyed!). They would continue to do so, and this is also true for pigs, sheep, and goats, which even today have substantial wild populations. There is no reason to think that the animals we are eating and using wouldn’t be able to return to their natural lives living freely in nature—they already are!

Cows are the only possible question—their progenitors, the aurochs, were forced into extinction in the 1600s, but it is certainly conceivable that cows could be reintroduced into central Asia and Africa where they lived for millions of years, and with time would return to the ecological niche they inhabited before we tore them from their ancestral homelands.

So, it’s a refreshing question to ponder. It’s remarkably uplifting and heartening to reflect on “what will happen if we all stop eating meat, dairy products, and eggs?”   There’s really nothing except our culturally mandated, deeply-ingrained, and deluded habits of routinely abusing animals for food.  Each one of us has the power to stop eating animals and it will take us a small step closer to a happier, more sustainable, more compassionate, peaceful world.

4 thoughts on “‘What Would Happen to All the Animals if Everyone Went Vegan?’”