There were 2 big stories in the news last week which demonstrate how utterly arbitrary, hypocritical and deluded our morality is when it comes to animal ethics in this country.

Firstly there was the appallingly cruel arson attack on a Manchester dogs home in which 53 dogs died.  This story became bigger news for the fact that people were so moved by this deeply upsetting story that a JustGiving page was set up and donations flooded in from all over the world, exceeding £1.3 million in less than 3 days.  Staggering.  Heart warming.  Amazing.  It goes to show how deeply people care about dogs – even dogs that have been left unclaimed in a dogs home – dogs that would largely have been pit bull terriers and Rottweilers and other such breeds.  Breeds which are at the less ‘cute and cuddly’ end of the doggy scale.  And still people are enormously upset by the idea of these dogs suffering such a painful and frightening death.

In contrast, on the same day, there is a story about a cull that had been carried on miniature pigs and piglets in the Swansea area.

Over 100 micro-pigs were culled by a licensed professional.  “These animals presented a serious risk to other livestock in the region in the event of a disease outbreak, and because of this we were left with no option but to carry out a cull,” said a spokesperson. What a load of horseshit!  The only threat these animals could possibly offer is if they come into contact with farm bred infected pigs as they could then spread the disease.  Why on earth should these wild pigs pay the heaviest price for the farmers carelessness.  If the commercially bred pigs weren’t harbouring disease in the first place then there wouldn’t be a problem.  It’s exactly the same story with the badger cull and TB.  The farmers should ensure that their cattle don’t get TB and if they do then they should pay the price.  They shouldn’t be farming cattle in the first place as far as I’m concerned so I’m afraid I have little sympathy.   If culling innocent badgers is their solution then they clearly it’s a non-starter of a business model!

These same farmers who claim to be animal lovers were the ones who put pressure on Swansea Council in the first place to carry out this appalling cull.  Yes, some farmers may care about their livestock, but as soon as something might get in the way of their profit margins, you see where they really stand on animal welfare issues.

The slaughter of these innocent, healthy and harmless pet pigs amounts to an atrocity that should be totally unacceptable to an educated and caring society.

So this is an amusing prank video carried out in a supermarket in Brazil which is worth watching just for people’s faces and reactions:

the reality of how our sausages get from piggy to pan is something that none of us are actually comfortable with.  When faced with the reality of it, we are completely repulsed by it.  So why do we happily buy and east sausages?  Because we can do so without ever having to face up to the reality of the hideously cruel world we are financing and supporting.  How many of you have been to a pig farm like this one in Scotland?

Or this one in Vermont?

How many of you have ever been inside a slaughterhouse and watched a pig being ‘processed’?

I was bought up surrounded by animals and farmers and my dad was a sheep farmer.  But the reality of the slaughterhouse process, especially the industrial scale ones we are seeing more and more of as the world’s appetite for meat grows, sickens me to my stomach and I’m sure it would yours if you were brave enough to do your research and take a closer look at how your sausages arrive on your supermarket shelves or butchers hooks. 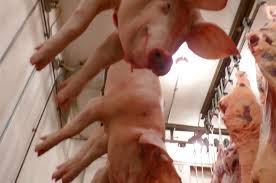