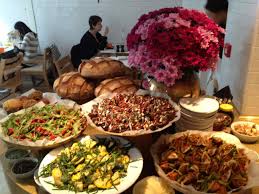 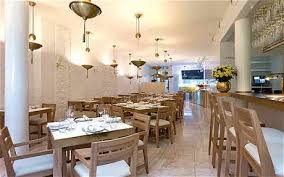 I was so excited about my first trip to NOPI and had heard such great things.  I have all Ottolenghi’s cook books and they have been faithful friends over the past year, comprising of mostly vegetarian recipes which are easily reconfigured to vegan ones and many many vegan ones too!  So for vegans – Ottolenghi is our friend!   Or so I thought….

The whole evening was probably the most stressful restaurant experience I’ve had since going vegan (except possibly for the French chef who slowly garrotted and then quickly guillotined me with his eyes when I asked whether his chips had been cooked in animal fat….!).  Being an Ottolenghi restaurant, I didn’t bother phoning ahead (which I usually do) to ask whether they would be able to cater for me.  I just assumed it would be no trouble.  1st mistake.

I then had a 20 minute very confusing conversation with a very sweet but seemingly clueless waitress who insisted on showing me the lactose free menu when I asked what vegan dishes they had.  Everything listed on this menu had either goats cheese, yoghurt, cream or some such included in it and it was impossible to ascertain from her whether these were vegan versions (which would have been unexpectedly wonderful!) or if they were just going to remove the non-vegan elements from the dish and give me the remaining bits (not so wonderful).  I tried to explain that if they didn’t really have anything vegan then I would rather have a vegetarian meal and enjoy it rather than a really badly thought through vegan meal; I felt it was my fault for not calling ahead and this was a special night out with friends I really didn’t want my veganism to cause any fuss…. The waitress repeatedly reassured me that the whole lactose free menu was all vegan and would be delicious.  Fine.  So I ordered three tapas dishes:

What I knew would happen was exactly what happened.  The plates just came with the non-vegan bits removed.  So dry roasted aubergine & pistachios and dry sweet potato with seeds – all horribly dry and turning my mouth into an endless cement mixer.  This obviously really annoyed me as I had tried to be as cooperative and respectful as I could be by offering to forego my veganism for the evening in favour of sampling their amazing food.  Having said that – the edamame bean dish was incredible so it was a complete disaster!

I really don’t know what the right answer to do in these situations is.  My instinct is to try your best to stick to your principles but if that doesn’t seem to be feasible at the same time as having a great meal then you have to decide to either opt for the vegan but poor quality meal or a non-vegan one-off meal out of respect for the chef and their cuisine.  I’ve done both probably in equal measure and I still don’t know what is right.  You feel a bit pissed off either way really!  Having said this, these are the exception and not the rule.  Nearly all restaurants I’ve been to in the last year have had a vegan option available and if they haven’t then I’ve called ahead and they’ve been only to happy to whip up a vegan something so it really isn’t a very big problem.  It just poses another interesting social and moral dilemma of what choice to make…

I didn’t say anything of course and just put it down as a good lesson learned.  Remember – always phone ahead and don’t let waiters and waitresses bully you into ordering something you know is not what it seems!

So I sought solace in a delicious soya latte.   But I should hasten to mention that everyone else’s meal looked absolutely delicious and every plate was licked (quite literally) squaky clean!